As Vice President of Finance, Harrison will oversee the continued development, refinement and optimization of the Hotel Engine business model. He comes to Hotel Engine most recently from Procore Technologies, a provider of cloud-based construction software. He held prior roles at Pacific Crest Securities and Goldman Sachs, and completed his education at Claremont McKenna College.

Harrison is a huge soccer fan, and enjoys many active hobbies like cycling, hiking, skiing, kayaking, and surfing (although he will be putting away the surfboard after relocating from Santa Barbara, CA to Denver, CO). He lives with his fiancé (who he is marrying at the end of May) and their Golden Retriever, and he loves to unwind with sci-fi novels and TV at the end of the day. Fun fact about Harrison: when he was 12 years old, he had a small acting part in a kids’ comedy show called Kicking & Screaming, and he is still a member of the Screen Actors Guild!

Taking on the role of Vice President of Account Management, Ali Jarosh will be overseeing customer relationships and experience. Ali is an executive with more than 15 years of success creating and scaling teams for growth. She comes to Hotel Engine from Trimble Transportation, an explosive growth startup that she helped grow to over $650M in recurring revenue. At Trimble, Ali led teams in customer operations, support, beta, experience and success — if the word “customer” was in the role, she probably did it! Her favorite role was creating an Account Management team from the ground up.

Ali believes that the best business stories are powered by incredible people, and she’s thrilled to join the amazing team in place at Hotel Engine. She is based in St. Paul, MN, but her favorite travel destination is the Mediterranean. Fun fact about Ali: in college, she worked as a costumed character at parades and festivals. Clifford the Big Red Dog was her favorite!

The whole Hotel Engine team is thrilled to welcome Harrison and Ali aboard. We can’t wait to see what they’ll accomplish. 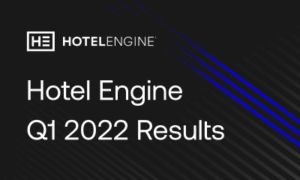